A Sentimental Journey: AFTER THE WAR by Libby Sternberg

Authors often talk about their "writer's journey," the path that led them to writing, the obstacles they faced along the way, the methods they used to overcome those obstacles, the self-examination that led to their works, to expressing ideas through stories.

My writer's journey began with After the War, the novel I just released through Istoria Books. Oh, it wasn't called After the War when I started it. At first, I called it The Conversion of Paula, then just Paula, then Margaret (for another main character in the book) and only after something like a dozen years did I light on After the War.

You read that right--a dozen years. I started writing this story more than a decade ago, just around the time I decided to stop denying my desire to be published and to get serious about becoming a real author.

After the War began as the story of two women--Margaret (Sister Francis Marie) and Paula--in post-World War II America, both on journeys of love and faith. Paula was to be a Mary Magdalene-like character, fallen from grace and seeking...something meaningful in her life. Margaret was to be something of a zealot for whom faith was more a "bribe or even a dare." As I wrote and rewrote and rewrote and rewrote (at one point, I had at least three versions of the book printed out, from which I was cobbling the final story), other characters called to me. Tell my story, they shouted, whispered, beckoned. And so I did, adding in the tale of Margaret's nurse, her psychiatrist, her brother--Paula's husband--and that of the priest, Father Al,  who guides Paula to baptism.

But if this is a story of faith, it is not a theological treatise. After the War explores faith from the perspective of the ordinary man and woman, who wrestle with questions of the injustice of the death of good people, of sin and forgiveness, and try to make sense of what is expected of them, who God really is.

Throughout every iteration of the story, however, I found myself confronting another theme: the war. Specifically, how World War II touched the lives of each character and how its effects shaped their current lives. Eureka! I thought when I discovered this theme. Of course. Of course I was writing that story. I am a baby boomer. And like all baby boomers, I grew up in the shadow of the war. Or rather, in the great warm sunlight of relief that followed it. My father's Army uniform hung in the basement. My parents' wedding photo featured him in uniform and my mother in a fine suit. My friends had had parents who'd served in the war. It was a visceral presence in our lives.

So ultimately, the book became a sentimental journey exploring how all the characters' lives were shaped by the cataclysmic event of a world at war, whether they served in the military or not. As Father Al muses when thinking about his own losses, which were not from direct military actions: "That was the reach of evil. It touched the lives of far more than those who stared it down outright. It oozed as well as marched to claim its victims."

I hope all readers enjoy After the War, but I'd be particularly interested in hearing the reaction of baby boomers to its tale--whether it strikes a chord with them and takes them on a sentimental journey to that bright summer afternoon that was our youth, released from the perils our Greatest Generation parents had faced on our behalf.. 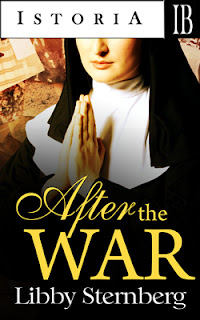 After the War by Libby Sternberg

A decade after the war, its devastation still haunts them...

In the summer of 1955, a young nun awakens in Johns Hopkins Hospital after suffering an overdose, unable to remember the events that brought her there. As she recovers, she becomes the center of quiet struggles among those who surround her: her brother, a former GI still stung by betrayal during his years of service; her sister-in-law, a beautiful woman seeking love at any price; her confessor, a Jesuit priest who lost everything during the bombing of London; her nurse, a war widow whose sunny optimism leads to repeated disappointment; and her doctor, a psychiatrist beset by survival guilt and doubts about his profession's ability to heal. Suffering from unseen war wounds ten years after the fighting ended, they each find their way to a very personal peace.

"...a touching novel of faith and family...an evocative story of love lost and found, told with beautiful language and emotional clarity. A novel to savor."  Christy English, author of The Queen's Pawn.
Posted by Libby Sternberg at 8:23 AM

Welcome to the Istoria Books blog where we showcase our authors and random musings about books, publishing, reading and more! Please sign up to hear news of new releases and special discounts. You never know when we'll reduce prices on our books for a short period of time.

Check out our website, too, to see our acclaimed inventory!